RUSH: You talk about Democrats? What did I just say? The Democrat Party is looking for a candidate who can lose jobs, who can cause wages to stagnate. James Clyburn from South Carolina, former chairman the Congressional Black Caucasians... Everybody wants the Clyburn endorsement going into the South Carolina primary. Plugs claims that he's gonna get it. We don't know who's gonna get the Clyburn endorsement. But wait 'til you hear this. 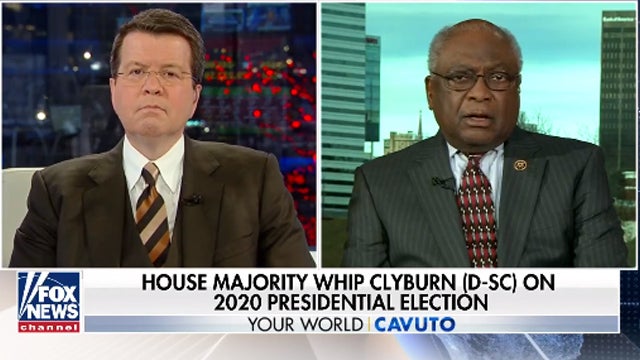 "James Clyburn," Congressional Black Caucasians, "Dismisses Record Black Employment" in America today. He was on the Fox Business Network on Tuesday. He dismissed record low black unemployment under Trump, stating, "We were fully employed during slavery," so this doesn't carry any weight with him. Folks, is that reasonable? Is that logical? Is that even sane? I mean, what kind of anger or partisanship must you be simmering with or effervescing almost going to boil over with? Here are your people, African-Americans, having one of the most record economic periods in their lives.

There's more economic opportunity, more jobs being held, record low unemployment for African-Americans, and he dismisses it. (impression) "Well, we had higher employment than this back during slavery. This doesn't impress me." This came... It was Neil Cavuto, who Trump's having some problems with now, I gather. Neil Cavuto said to... Wait a minute. Now, let me check here. I just... I'll see if we might have this on the sound bite roster. I don't know that we do, but if we do... Doesn't matter. The question was... (interruption)

Wait a minute. Somebody's just sending me a... (interruption) Oh, it was yesterday. We didn't get to it. My bad. Anyway, here it is. "e's delivered the goods for a lot of African-Americans. Does he not with record-low unemployment levels? ... You don't think that's something that's constructive?" And Clyburn said, "I'm saying that the African American unemployment is not the lowest it's ever been unless you count slavery... We were fully employed during slavery. So, it all depends how you measure this up."

Okay, then a companion story, "Sen. Tim Scott," African-American, South Carolina "Predicts Trump Could Get 15% of Black Voters in 2020." If that happens, that alone is gonna be an earthquake inside the Democrat Party.

RUSH: Here's James Clyburn, the Congressional Black Caucasians. We had this yesterday, but I didn't get a chance to get to it. It was Tuesday night. Fox with Cavuto. Question: "Whether you like the president's style or not or his tweets or comments, he has delivered the goods for a lot of African-Americans, has he not? I mean, record low unemployment. Don't you think that's something that is constructive, Congressman Clyburn?"

CLYBURN: No. No. Because it's not true.

CAVUTO: What do you mean it's not true?

CLYBURN: I'm saying that the African-American unemployment is not the lowest it's ever been unless you count slavery. We were fully employed during slavery. So it all depends how you measure this up.

RUSH: Man, oh, man, what kind of hatred and anger do you have to have flowing through your veins to have an answer like that, to go back 200-plus years? This is why these people, the Democrats, this is why they cannot move forward. This is a classic example of grievance, victim politics and that they can't move on from it.