RUSH: This is Marie in Dayton, Ohio. Glad you waited, and welcome to the program. Hi.

CALLER: Hi. Thank you for having me. I'm praying for you. I hope you get better. I'm a first-time caller, and I just wanted to say that I am not a victim. I am a minority. I don't believe in victimhood. But racism does exist, and it comes from the Democratic Party. A lot of people miss this. Elizabeth Warren said during the debate that "we need to pay people more so we can pay the black and brown people who do this work," and she was referring to childcare work.

CALLER: And what that tells me is that she believes that black and brown people are the ones that do that work, when there's white people that do the honorable and good work of childcare. But brown and black people are also entrepreneurs. And it's our persistence and perseverance and our belief in a strong work ethic and our belief in the American dream that helps us overcome and become business owners. I myself am. I was fired from my company, and I bought a company that fired me two years later. But it wasn't because --

RUSH: Wait just a minute. You can't just flash that by us. You were fired by a company and you bought it two years later? How did you do that? 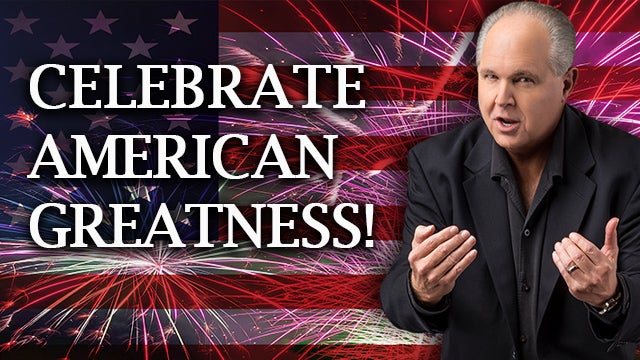 CALLER: Well, it was a fluke. I never thought I'd be CEO of the company. I was selling medical diagnostic equipment to diagnosis dizziness, concussions, and traumatic brain injuries, and I was fired because they said... Ironically, they said, I'm making too much money because I'm not educated. I'm not a doctor, and doctors should be selling to doctors. I shouldn't be making that kind of money. I was straight commission and so they fired me.

And at that time, I was a single mom with four kids, minority. But I didn't say, "I'm a victim," or, "It's a crime from the white man." No. I went out and I worked, and I worked my butt off, and then I started another company, and I earned enough money that when they found out how well I was doing, they looked and they said, "Hey, are you interested in investing?" and I said, "Interested investing? Well, let me take a look at the books."

RUSH: Your point is, you're a minority businessowner.

RUSH: Yeah, you've actually purchased the company that fired you.

CALLER: Exactly, and that's what they say. If you listen to the debate, you listen to everything they say, they think you're too stupid. You need the government to help you if you're a minority.

RUSH: Because they...? Exactly! Because they pander to you. That's exactly it. You said it. She said it, not me. She's a minority businesswoman. She said it. That's exactly how the Democrat Party looks at minorities, as incapable. You know what the biggest problem is? It's "the soft bigotry of low expectations," and that's what the Democrat Party and the American left does to minorities. One of the worst things... If you're a parent and you have kids, one of the worst things you can do is have low expectations of 'em and tell 'em that.

If you expect great things from them, that's motivating, and it can become self-fulfilling. But if you have low expectations -- and it's exactly right. The Democrats are built on that philosophy. The soft bigotry of low expectations. "You can't do much. You can't do it on your own. You can't do it without us." But it's not just minorities that the Democrats treat that way. It's a whole lot of their voter base. It's how they look... That's the preferred constituency: People who just can't do much on their own. It's obvious here from Marie that she's offended as hell by that -- and given what she's done, I totally understand.

I'm glad you called. Thank you so much.